Confirmed Deliveries is a Paid OneSignal Account feature that tracks confirmations of successful receives of notification per device.

Every device that receives a notification sent through OneSignal will now acknowledge successful receipt back to OneSignal, data that is then available to all paying customers. In the Message Report for a notification, look for the Confirmed metric. 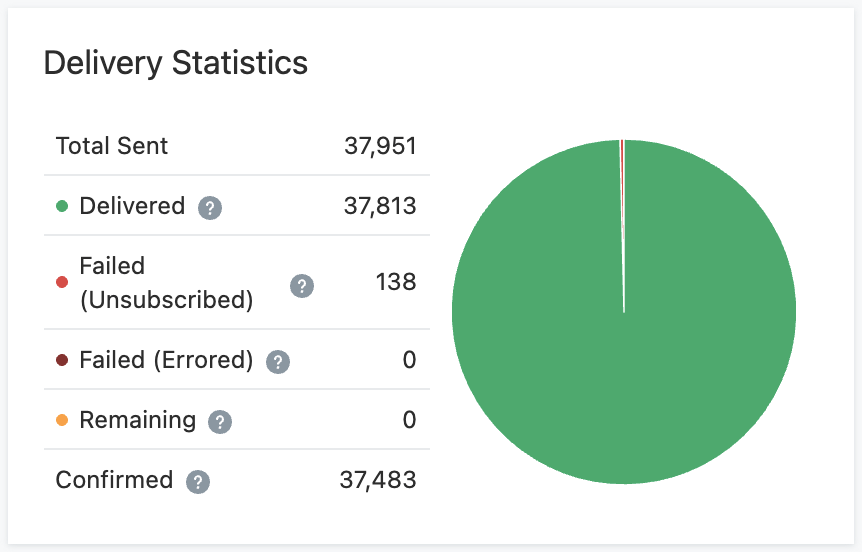 How do Confirmed Deliveries work?

To understand Confirmed Delivery, you must first understand what goes into delivering a notification to a device. In general, push providers must go through Apple and Google in order to deliver notifications. This means that there are multiple "hops" between OneSignal servers and the intended device. 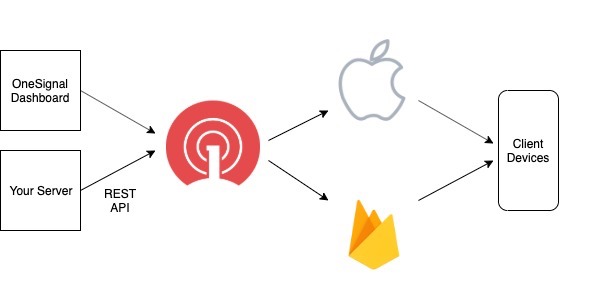 Without device-level confirmation of notification delivery, OneSignal can only confirm the successful delivery to Apple Push Notification service and Firebase Cloud Messaging servers. However, our new Confirmed Deliveries feature now takes the form of an extra network request, from the device back to OneSignal servers acknowledging the notification: 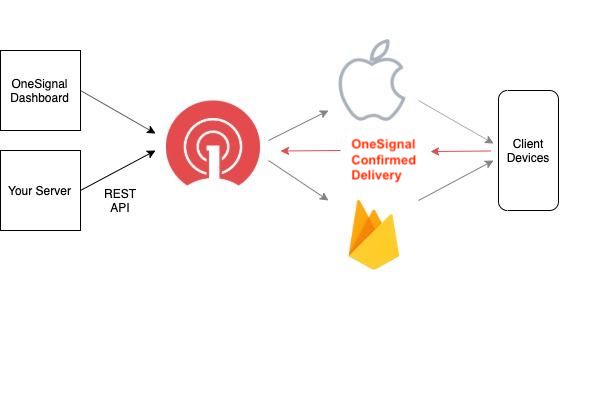 When the Android App receives the push, it sends a confirmation to our servers letting us know the app itself has received the push. On iOS Apps, you must have the iOS Notification Service Extension setup for the confirmed delivery to be counted. Also make sure you are using a version of our SDK that supports this feature, see below Supported SDKs Table to make sure you have the minimum version or higher.

Why are Confirmed Deliveries important?

Confirmed Deliveries provide a true understanding of what is happening with your messages and help you monitor the health of your messaging pipeline and use metrics to better debug your implementation.

Without Confirmed Deliveries, click-through rates are calculated by dividing the number of confirmed notification opens by the total number of subscriber devices targeted:

However, "phantom subscribers" will result in less accurate CTR over time. These devices are ones that have never unsubscribed (e.g. by deleting your app), but are no longer used or are powered off.

For example, say someone who just upgraded to a new smartphone throws their old device in a drawer and never touches it again. Despite permanent inactivity, this device is technically still subscribed to your app. When calculated this way, CTRs become gradually less accurate due to these "phantom subscribers." This can be seen in the graph below:

This can be visualized in the graph below:

Up until now, OneSignal didn't have a way to calculate how many devices actually received the notification. With Confirmed Deliveries, you will now be equipped with the power of near-perfect delivery statistics.

Why isn't this offered by most push providers?

To confirm device-level delivery of a notification, push-providers must process an extra inbound request for each push. This leads to a large burst in traffic to their servers, which requires heavy infrastructure. Processing inbound requests requires more than simply sending requests. When OneSignal's infrastructure sends out pushes at a sustained speed of one million pushes per second, it must then be able to handle over one million incoming confirmed deliveries at the same rate.

Make sure you have the minimum SDK version or higher installed. We recommend using the latest version of the OneSignal SDK.

Why does OneSignal provide this functionality?

We know that customer communication is a critical part of your infrastructure. It is important to us that our customers are successful and empowered with these core insights to make the best possible decisions with and get the most out of their messages.

How can I increase Confirmed Deliveries?

Confirmed Deliveries cannot be triggered if a device is turned off. If a device is offline when the push is sent, it has 3 days default time to come back online to get the push. You can increase or decrease this time with the Time To Live parameter.

Also, a Confirmed Delivery may be missed if the device has unstable network connection at the time of receiving the push. The push may get received and clicked, generating a click response, but the network may not have been strong enough to send the received event.

Some android device manufacturers put apps into a "force quit state" when you swipe the app away which causes the device to not get notifications for your app when it is not running. Unfortunately this is a manufacturer issue that affects all push providers.

We have a list of common devices and fixes for this in our Notification Not Shown Guide. We also wrote a blog post about this and many 3rd party sites discuss this as well, like: https://dontkillmyapp.com/

To try educating your users about this, you could setup In-App Messages to target users on Android and make sure they have battery optimizations for your app turned off or they are setting keeping your app running when swiped away.

As described above in the section Why Are Confirmed Deliveries Important, users do not normally unsubscribe from all their apps or websites when they get new devices or retire their old ones. In fact you may have some devices at home that are subscribed to apps you have not visited in years!

Using Segments you can check all device record's that have not opened your app or website in over x amount (1 year, 6 months, event 1 hour) of time using the "Last Session" filter.

If you have devices that have not returned back to the app or site you can delete these devices. However, make sure you do not accidentally delete active users.

All push notifications sent to iOS devices automatically include the mutable-content parameter set to 1. This allows for the notification to be processed by the Service Extension which is required in order to make Confirmed Deliveries work correctly.

How to track which devices confirmed delivery?

In order to track which specific devices confirmed receiving the push, (for example you want to send an email, In-App Message or SMS if they did not confirm) you would need to target devices individually either with the include_player_ids or include_external_user_ids targeting parameters on our Create notification REST API.

You will want to save the device ids targeted and notification "id" provided in the API Response. Further if the device is unsubscribed, you will get the unsubscribed device id in the invalid_player_ids or invalid_external_user_ids response.

After x amount of time has passed that you want to wait for checking if confirmed, you can use the View notification API endpoint with the notification "id" saved from the response.

If received is 0, then they device has not received the push yet. Depending on how long you want to wait, you can set the ttl parameter to discard the push if x time as passed. See Notification Behavior & Payload Information for more details.

Displayed but NOT Confirmed

Confirmed but NOT Displayed

Delivered status but NOT Displayed AND NOT Confirmed

Not really a “Confirmed Delivered” issue but covering here for completeness.

Updated over 1 year ago